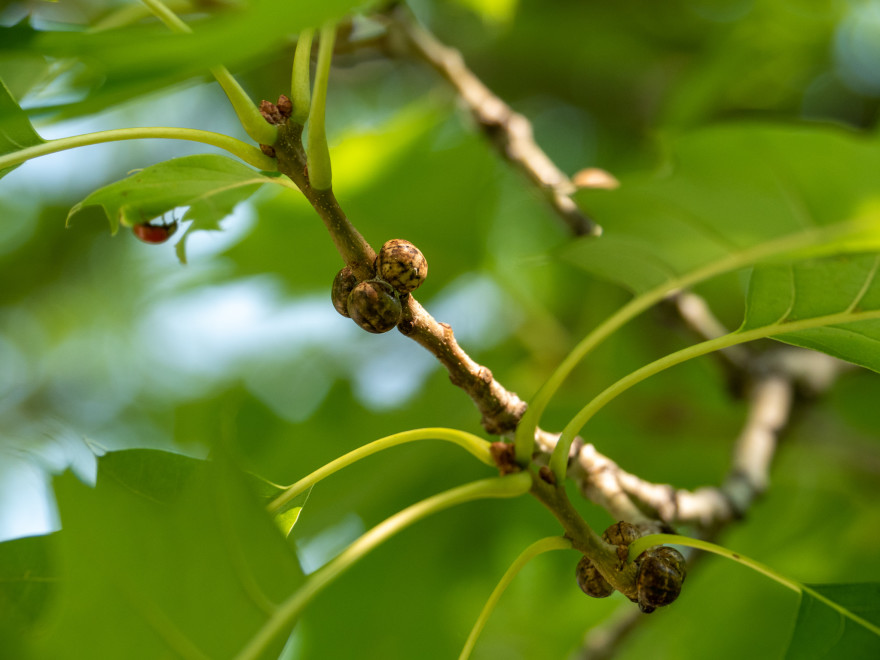 What are Scale Insects?

Scale is an insect with piercing-sucking mouthparts, which attaches to twigs or branches of the tree and settles in to feed on the sap of the plant. Most scales are host specific, meaning that they usually only attack one type of tree or plant. However, there are so many scale species, that most plants have one scale that they are susceptible to.

Why do I care about Scale?

Scale has recently devastated our front range Oak population. Kermes scale, the species that attacks Oaks, also carries a bacterial infection known as drippy blight. If your favorite Oak tree in the yard has been raining sticky ooze for the past couple years, you have Kermes scale. Kermes and the associated drippy blight can cause severe canopy decline.

Another scale that has done a number on our local trees is European Elm Scale. European Elm Scale develop significant populations on American Elms (and Siberian Elms, though to a lesser extent) and can cause similar issues to Kermes scale with honeydew exudates from the insects becoming a nuisance.

What can I do about Scale?

Luckily, there are some treatments that are effective for scale on Oaks and Elms. We time these treatments to target the most vulnerable life stage of the pest - the “crawler.” Crawlers are immature life cycles of the scale, and are the most vulnerable because they are mobile after hatching. Kermes Scale timing is typically sometime early to mid June, and Elm Scale treatment windows are mid June through mid July.

Another option are dormant season sprays, which are one of the best tools when fighting these pests. Winter applications are made with horticultural oils and insect growth regulators, which prevent crawlers from the previous year from molting - or growing to the next phase of their life cycle, the hardened, waxy exterior, which will reproduce more nymphs the next year.